Sauganash has been included in the National Historic Register, the nation’s official list of places recognized for their historical or architectural significance and considered worthy of preservation.

Sauganash represents a unique and well-preserved Chicago residential development from the early 20th century, and it includes beautiful examples of many styles of architecture not found anywhere else in the city.

While a National Register listing is not restrictive like landmark status, it provides limited protection and makes property eligible for certain financial benefits.

The boundaries of the historic district are Sauganash Avenue to the north; Rogers and Caldwell Avenues to the south; Lemont and the east side of Keating to the west; and the Valley Line Bike Trail to the east.

The period of significance is 1912, when developers Koester and Zander purchased the land that became Sauganash, to 1945 and the beginning of 20th Century urban development.

If your home is in the designated area and it is considered contributing, it may be eligible for Federal and State tax credits to help preserve its original facade. Two Sauganash residents are on the Landmarks Illinois Preservation Easement Program review committee so you can be confident that the committee will appreciate the historical significance of your property. To learn more, visit: 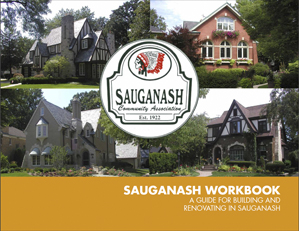 Download the Guide for Building and Renovating in Sauganash